Celebrating the Best Contributions of Week #8

The results are in!

A windfall of creativity
Together, we have collected 19 curiosities. If a visitor set about to learn about each one, they’d easily spend an afternoon in our eclectic museum.

And the winner is: 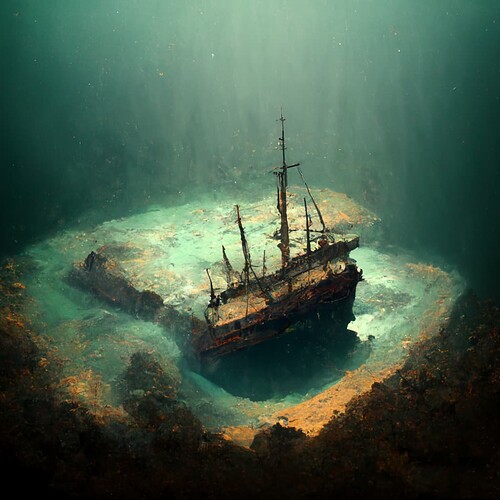 In prior international court rulings, Spain has successfully argued that the gold lost by the Spanish fleets from long ago still belongs to Spain. Just because the gold is on the bottom of the sea does not mean that Spain has lost possession.

In @yaquote’s third novel, “Shrimpin’ Gold”, the owner of a shrimping boat and his first mate happen upon sunken treasure – a much-needed stroke of luck. Their joy turns to ashes when they discover that the gold still belongs to Spain. The two men face a moral dilemma: Should they pay the first mate’s wife’s medical bills and save their business or comply with the law? What would you do?

This is what we imagine that sunken Spanish galleon to look like. Enticing.

I found out that forensic pathologists dislike coroners, and vice versa. (…) Pathologists see coroners as politicians while coroners see pathologists as a group of antisocials who don’t communicate well with regular civilians.

While researching for her work in progress, @orangeaya came across this interesting dynamic in the world of law enforcement. In reality, this may be frustrating for pathologists and coroners alike. In fiction, it is a wonderful opportunity to heighten conflict.

I have learned of Skin Walkers and Nordic Forest Gods, of worlds hidden in plain sight full of things unimaginable. Story after story of monsters and men, locked in an ancient battle of good and evil. I started to notice something on this journey. I found that it wasn’t the content that was so amazing, it was the medium.

@calebtthomas studied folklore and found universal truths about the ancient art of storytelling.

If there is one thing that became obvious in week #8, it is this: We learn something new every time we tell a new story. And every new thing we learn can inspire another story to write.

In the tenth week of Turning Tales, we play with the tropes and clichés we usually avoid. Love at first sight, indestructible plot armor, supervillains that really just want someone to listen to their origin story – nothing is impossible.

Thanks for year of Papyrus, I’ll use it wisely. The software may force me to use a bit more discipline in my writing strategy.

I loved the picture of the sunken ship to go with the tale,

These writing challenges will likely keep us on our writing toes or should it be typing fingers. Perhaps those references are for this week’s challenge.