Does Papyrus Author Pro have the ability to create indented bullet points? I create/maintain user manuals and often have sub-points to a primary point. So far I have not found a way to accomplish this in the app.

It’s not exactly an indent like for running text, but you can define hierarchy levels and custom characters to be used in any style.
In your case, you could set up new bullet styles with [TAB] characters in front of the bullet (and more Tabs for sub-points) 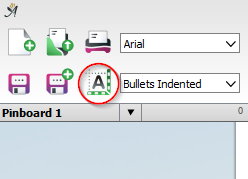 Copy the Bullets style and customize it with [TAB] characters before the bullet character:

To edit how [TAB] characters behave, you can move the triangle and dot in the ruler: 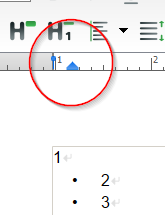 It’s not exactly an indent like for running text, but you can define hierarchy levels and custom characters to be used in any style.

I think the hierarchy level setting is only relevant for headings which will be included in the table of contents, the navigator, or a TOC in a PDF or ebook file. For ordered or unordered lists it does nothing.

Copy the Bullets style and customize it with [TAB] characters before the bullet character:

The solution to use [TAB] characters before the bullet character looks rather strange to me. In this case, one also needs to add tabulator positions for each [TAB] in the ruler.

Instead, I would duplicate the original Bullets style (with a format description of “•[TAB]”) and only adjust the left margin (triangle) and first line indent marks (dot) in the ruler. The dot will determine where the bullet is positioned and the triangle will define the left text position. The triangle also acts as a tabulator position.

If different levels of bullets are to be exported to HTML or EPUB it is advisable to also check the settings at Paragraph > Styles > HTML > Associate HTML block element. The first level of bullets should have “Bullet list (ul)” assigned and deeper levels should have “– level 2”, “– level 3” and so on. This will ensure that bullet lists will be properly nested in the HTML export.

For numbered lists there is a separate set of “Numbered list (ol)” elements.