Questions about moving text from Word to Papyrus

Hello,
I have been working on several fiction books for quite some time now. I started them in Mircosoft Word 2010. I recently discovered Papyrus Author and decided to try it. I am working on the first book I tried to imported it but I could not get it to show the multiple chapters. It only showed up as one chapter instead of the 10 or 11 chapters that it really was. So I manually copied and pasted each chapter into the project. Now I was trying to put scenes into the chapters where I change point of view in the chapter but I am having the same problem I had when I was trying to put the chapters in. It will add the scene at the end of the chapter instead of where I want to insert it so I try to copy and past it under the line but then it just erases it in the navigator part of the program.

I really do not want to type the entire book from the beginning to get things added that I want there. And at this point I think that is what I am going to have to do with the second book that I have not even gotten to because this is taken so much time to deal with that I end up not wanting to work on my book. I have already had to change my Prologue to be Chapter 1 in the book because I could not add a prologue to the Navigator, now I cannot seem to add scenes to the chapters without having to retype the entire thing.

I apologize this is so long and I hope I have explained what I am trying to do well enough for someone to be able to assist me.

Thank you in advance for your assistance.
Seba

Hi Seba and welcome to the Community

There are several ways to insert scenes into your text.

Adding them via the Navigator, if it is the first scene in that chapter, will automatically add it at the end of the text (in that chapter). This sounds like what is happening in your document. Once you have entered one scene in a chapter, you will get the options to “Add Scene Before” and “Add Scene After”. However, as scenes are in effect virtual boxes around sections of text, they will be added in relation to the current scene / chapter markers and not necessarily where your cursor is positioned.

If you want to add a scene at a particular point in the text, place your cursor where you want the scene to begin. Right click to see the context menu and then select “Scene”. 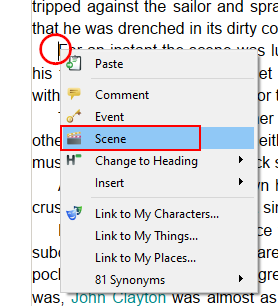 You will then see the scene marker appear exactly where you wanted it.

It will also appear in the Navigator in the relevant place.

Going to the “Insert” menu in the toolbar and selecting “Scene” will also insert it where your cursor is currently positioned.

I try to copy and past it under the line but then it just erases it in the navigator part of the program.

The scenes, like other graphic images, all have anchors fixed in the text. When a scene is added via the Navigator it is inserted with the marker image and some default text:

The scene marker anchor is fixed to the left side of the text. If you are highlighting the “Scene Content” text so it is overwritten as you paste the scene content, you have to be careful not to included the scene marker anchor. If you do, it will disappear because it is being replaced when the text is pasted in.

If you do accidentally overwrite the scene marker, you can just replace it using the context menu as described above.

I could not add a prologue to the Navigator

You can indeed add a prologue to your text. This is done by utilizing the “Styles” in Papyrus Author. Here is a topic where we have discussed it previously: Change Chapter Titles

I hope this helps. Let us know how it goes