Papyrus Author pro
I would like to isolate only the chapters or paragraphs involving a specific character, so I and focus on that Character’s arch. Is there a way to do this?

Currently, the Timeline would be the best way to achieve this.

You could create a separate thread for each character you wish to focus on. The threads can be renamed, so they could have the same name as the character:

Scenes can be used to group blocks of text together. So, for example, as well as whole chapters associated to a character you could have different scenes in one chapter relating to two (or more) different characters.
The Timeline allows for concurrent as well as consecutive timelines within the threads so you can overlap the elements if you wish:

We’re looking into further development in this area so we’ll keep you informed here in the Community as well as all our social media channels when anything changes.

Thanks. I’ll try something like that. I hadn’t considered using the timeline in that way, but that would be helpful in many ways. It still doesn’t really get me what I was looking for, although I’m glad to hear it is something you may look into for the future.

In that spirit, here is more information on what I was looking for and how I use it. I think this ability would be a great addition to Papyrus:

I’ve been using Scrivener, and I have a book series spanning 8 books with a ton of characters (too many really, but that is my personal failing). I’ve found it very helpful to isolate the text regarding a single character, or a pair of characters, and cull out everything else. This allows me to read that character’s arc and see how it advances with out distraction. It also allows me to approach the story from their point of view. Scrivener allows me to do this, because the sections are divided into separate files and can be ordered in different ways, I can also multi-select in their version of Navigator, and see only the text I’ve selected. The Scrivener method has it’s issues too but this is very helpful. In Papyrus, I can’t multi select different chapters and see just the text in those chapters. I can’t isolate text from the main document and read/edit it together, with out changing the order of that text. Sometimes I want to see chapter 1, 5, and 8 and read them together, because they relate to one event and I want to make sure it flows well. However, I don’t want to change the order of the chapters. So far I don’t see a way to do that in Papyrus, but I think it would be a very helpful addition for writers. even for writers who have a reasonable amount of characters. I look forward to any improvements in this area.

If you color-code the scenes and chapters that follow a common idea, it’s pretty easy to jump between them in the Navigator just by clicking on the chapter or scene. In your case with chapters 1, 5, 8 I just click on chapter 5 after reading chapter 1 and it feels pretty seamless.

You can also drag&drop a chapter or scene within the Navigator and it will move the entire text with its layout to the new position in the book. That’s really cool when you decide to change the order of telling something in your story. 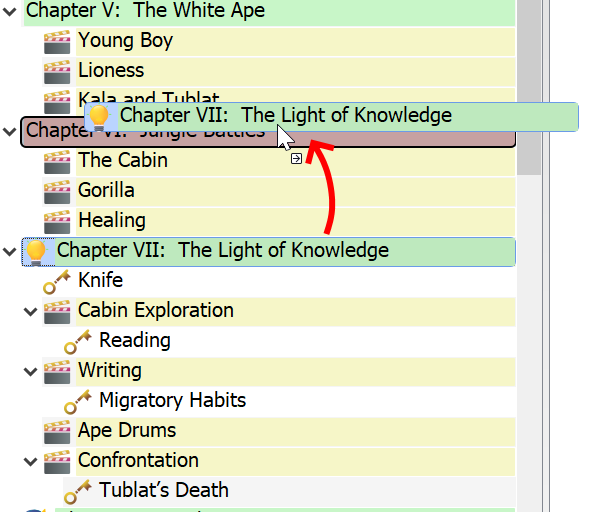 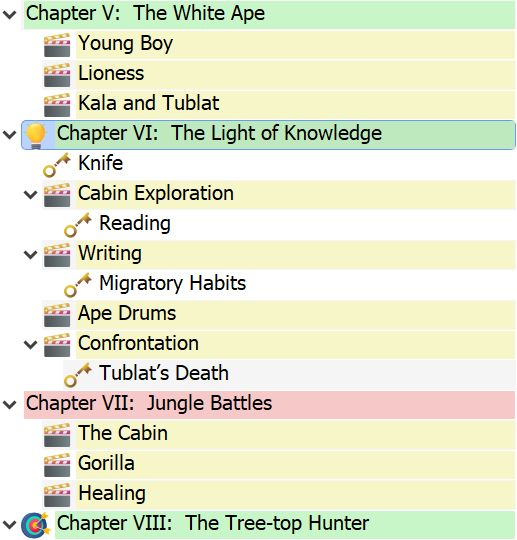 +1 on this feature (and also +1 on being able to multi-select in the Navigator. That is a weakness in PA, IMO)

I really like the idea that you have for editing across scene breaks. I never thought to do that in Scrivener, but it makes a ton of sense-- thank you very much for the tip.

Now hopefully, PA can figure out how to make a feature like that available here.

You could also use abstract objects to mark where characters appear in a scene, rather than are mentioned, and then use the Organizer to quickly step through and check their progress.

I do something like this retroactively so I can get an overview of my pacing when looking at the big picture. I assign ‘fake objects’ that never get mentioned anywhere in the text with names like “Physical-Conflict” “Emotional-Anguish”, dropping them into the box in the Info Panel after I complete each scene.

I never claimed my workflow resembles that of any other author, but we’re free to use the software any way we like. I make it do what I need, rather than what it is supposed to do.

That’s a cool idea too.