True, you can set a goal, start a project or change your life on a Tuesday in September, but the turn of the year makes it easier somehow. Many of us have time off around the holidays which enables us to stop and think for a while. And the year ahead feels new like freshly fallen snow, and there’s so much of it!

What are your writing goals for 2023?

Do you have a routine set up that will help you achieve this, a place and time where you can write undisturbed?

And have you already checked out the goal-setting tool in Papyrus Author?

How do you make writing possible under difficult circumstances?

I guess you could say I have many goals for 2023, but my main focus is to finish my current WIP and publish it. That’s the big goal.

I like to do things with a lot of pre-planning, as it helps set my mind on the goals I want to achieve. So, in order to meet my targets, I use this very helpful spreadsheet that is called the ‘12 Week Year’.

It stems from the idea that people are generally more productive for the last 12 weeks of the year in the run up to the New Year, when they realise they haven’t met their targets earlier. It’s pretty straight forward thinking:

‘Oh it’s February, I still have a whole year to get stuff done…Oh it’s only May, still over half a year to go…Oh! It’s October, I should probably do everything I wanted too before the New Year.’

The concept of the 12 Week Year is that it breaks down the whole calendar year into ‘4 years’. Now, it’s not to say you’ll get 4 years worth of work done, but it tricks your mind into being productive and focusing the entire time. If you see below, it is split into Week’s 1-4, 5-8 and 9-12. My main goal is to write 1000 words a day on my current novel, (and with the help of setting goals in Papyrus, this becomes a heck of a lot easier!) which after 12 weeks, will total 84,000 words, about a 350/400 page novel. Now, of course, I could end up writing more, which is never a bad thing, and I could end up not writing at all, or writing less, which when broken down into daily objectives, makes it easier too see where there is a shortfall, and days where I’ve exceeded the target, so I don’t have to worry on the days I haven’t. 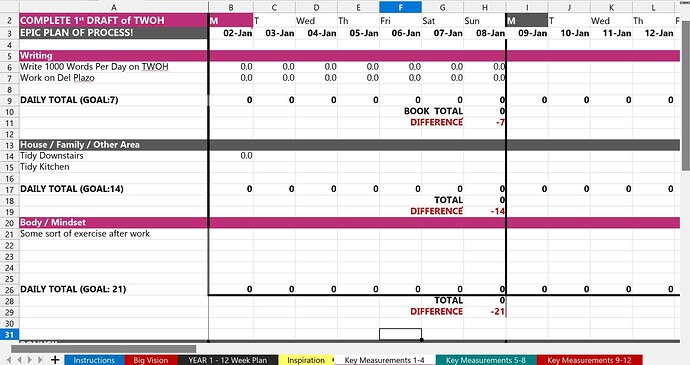 By the end of March, I should have completed my first draft. You may be thinking that the maths is off, 12*4=48…what about the other 4 weeks of the year? At the end of each 12 week year, there is a 13th week, which is used for not focusing on anything writing related, and on the Sunday at the end of that week, I use it to adjust the next 12 week year goals. So for the 2nd year, I would focus on edits. The 3rd year, focus on sending out copies to beta readers, and the 4th year, final edits and cover design etc.

Everything could happen faster than my plan, but again, it’s never a bad thing. If I wasn’t working a full time job around my writing, I could probably increase the words per day to 2000, or even 3000, which could potentially see 2 or even 3 releases with a whole year. The first 4 weeks, would see my word count at 84,000 already, and the rest would depend on the speed of editing and other readers, but there is always potential.

Anyway, this is how I like to organise myself so I can keep focused around a full time job and looking after my children. The extra few bits on the spreadsheet such as cleaning, and working out, are more for motivation to give me other things to do than JUST writing all the time.

Have a great new year to everyone, and make 2023 a productive one!

This makes a lot of sense. I must admit that I still find a year hard to grasp. It seems vast – until it doesn’t. Breaking it up into 12-week chunks makes it much easier. And I love how you’ve allotted the four “spare” weeks as well.